Fate Can Be Cruel - Book Two 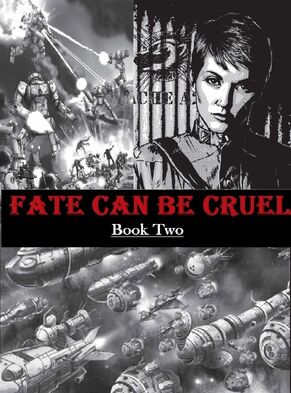 The book covers stories that happened in background of the setting, which was not covered detailed. Originally Fate Can Be Cruel takes place in outskirts of the Periphery in region formally governed by the Outworlds Alliance, whom abandoned colonies and districts in wake of the fall of the Star League. As with the first book of the FCBC series, key individuals whom fought the war among these characters were not featured in Canon, but played a role which changes the course of the history of the BattleTech universe in this fan story. First segment of the story would evolve in spy warefare managing ever increasing difficult ComStar whom no longer pays homage to the Hegemony and growing threat of Children of SLDF Commanding General Kerensky.

2ndAcr would add some minor new variants of existing units (Mechs, Ships, Fighters, etc) as his story would progress into the second book. These units have been listed on the wiki so they maybe used for everyone's use. Also 2ndAcr has introduced technologies which have never been seen in canon.

A parallel history with some background changes which happens not general public except for the last years of the Terran Hegemony. Briefly shoring up the Inner Sphere home of the Terran Hegemony, it would collapse under the assaults forces signalling the First Succession War. Director-General Amanda Cameron her loyal Star League returned to their Periphery territories in secret. With SLDF forces arrival with the heir to the Hegemony, marks new era. Much of the first Succession War would remain the same with exception of the Star, with interactions of ComStar changed due to the influences of the Hegemony in the Periphery, while publicly no one is aware of continue survival of the Terran Hegemony.

Slip Stream Technology
This is a technology unique to this fan Alternate Universe. This form of Faster than light engine. Which allows a Jumpship enter hyperspace and remain there for a duration verse instant travel. This can be seen as type of hyperdrive that allows for extreme speed in Jumpships / Warships and communications. Additionally these drives require ATAC computer to handle these jumps. There are three principle outputs of this technology the Hegemony is able to use;

Same as in the original book, YardShips can remove WarShips & JumpShips KF-Drives and rebuild them either new ships or replace into the original vessel. Canon does not go into detail this process or how it is done.

Another significant developed over the course of the Centuries during the Succession Wars is the Artificial Intelligence based on the old Drone Ships, among best known is the M-5 Casper WarShip, which causes great harm to the SLDF when they original tried to retake Terra when in controlled by Stefan Amaris's forces. This new computer system, designed by the Hegemony took different direction to allow for navigation through hyperspace with the new Slip Stream Technology, which normal humans are unable to handle. Additionally new generation of Drone Warships would also be developed using this new version of the Casper for preparation to handle descendants of the SLDF who fled to the Periphery, the Clans.