Fate Can Be Cruel - Book One 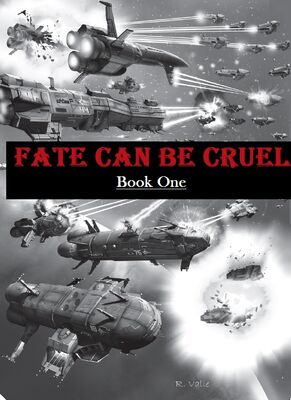 Fate Can Be Cruel - Book One, is the first part one in 2ndAcr's military saga of the Terran Hegemony being taken over by the Rim World Republic leader, Stefan Amaris. The book 1 tells the tale of Hegemony's and ultimately the fall of the Star League of the itself at the end years of the Star League Era. The book covers stories that happened in background of the setting, which was not covered detailed. Fate Can Be Cruel takes place in outskirts of the Periphery along the Outworlds Alliance and the Federated Suns. The key individuals whom fought the war among these characters were not featured in Canon, but played a role which changes the course of the history of the BattleTech universe in this fan story.

2ndAcr would add some minor new variants of existing units (Mechs, Ships, Fighters, etc) as his story would progress into the second book. These units have been listed on the wiki so they maybe used for everyone's use.

Additionally, PDF of the entirety of story has been combined into a single PDF, link found at external links. Wiki pages were established before this was done. It acts as back up to the PDF or more convenient for people to discover.

The story of the rise of a new Hegemony amidst of the canon Terra Hegemony's violent coup is non-canon. Initially most characters featured are not necessary were part of the original fiction. All major events prior to Liberation of Terra and Periphery Uprising before it did accrue in canon while the events themselves happened, but not in same fashion as they would in original fiction. The events of the book focus on part of the War which was not covered by older sources such as Liberation of Terra Part 1. Beyond the departure Kerensky, is interior non-canon.

This book is broken up by year. These sections can be large.

This book's entries have been edited by Outsider7724 to correct misspellings and grammar errors only. Not all errors were caught, thus a ongoing process.