The Argus is a fast Heavy OmniMech built May 3062 at the direction of First Prince Victor Steiner-Davion of the Federated Suns. Nicknamed Argus-O, the OmniMech is intended as a low-end Omnimech designed to operate as a moderately fast cavalry machine which could be utilized as a standard design for entirety of AFFS.

The Argus-O was built as part efforts to bolster the ranks of the army of the reborn Federated Suns and it was deployed among first of these mechs would find their way to the Robinson Rangers brigade and to the expanding Avalon Hussars brigade.[1]

Powered by a GM 300-rated Extra Light Fusion Engine on a standard frame. This gives the Argus-O modest high speed and enough room to fit out with up to 27 tons of OmniPods. The engine comes with standard 10 Double Heats. Normally, theArgus-O is not fitted with Lower-Arm actuators in either arm. This is so the arm mounted weapons may be flipped aimed to the rear.

Primary Configuration
Intended as long range support, the Prime features pair of Artemis IV enhanced 15-Tube Long Range Missile Launchers in the left arm and right torso. Backing up these weapons is single Extended-Range Particle Beam Cannon in the right arm. The design carriers twelve Double Sinks to round out the 'Mech heat management system, which requires the MechWarrior to bracket fire their weapons should they strike with their full weapons load.

Ammunition: The Prime carries 4 tons of Artemis IV LRM reloads in the Left Torso, with ammo in a CASE OmniPod. 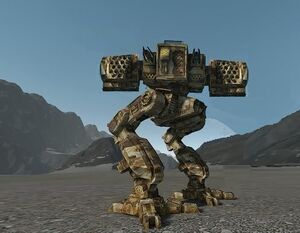 Charlie Configuration of the Argus-O